For those of you who don’t live in our hemisphere, we live in a sub-tropical zone. This means that our summers are usually wet and our winters dry. This summer things have been particularly dry and hot.

That is, until Thursday, when it started to drizzle softly. The quiet rain kept up for about 48 hours.

So on Saturday morning, despite the high spirits of everyone involved, and an exuberant human chain of smiling volunteers carting stuff to fix up the boggy ground, ‘Biofest’ in Cushnie was officially postponed.

Throughout the day the rain got a little louder on our tin roof. By mid-afternoon the rain gauge told us that we had had 72mm over the past three days.

We knew that ex-tropical cyclone Oswald had turned into a low and was headed down the coast (I’m a little bit of a weather nerd). I had checked in with my favourite weather forecast source** but I wasn’t sure how wet it would get for us here. We were on the edge of the forecasted area to be hit (which was getting a lot of focus due to the extremity of the weather involved) so we thought it may taper off or peter out once it reached us.

Just before dusk, we went for a walk to look at the property. We encountered some already very sodden ground, a 3metre carpet python draped out over a pile of mulch trying to get warm, and our experimental swale/holes looking very wet and fertile!

That’s when we noticed the ants. Everywhere the tiny black critters were climbing. With larvae on their back and in their nippers, the ants were heading higher – not just for higher ground, but as high as they could get. Some were making tracks for the ceiling our tent.

That’s when we knew it was going to be really wet. When ants move house en mass it’s a sure sign that the rains are a’comin!

Sure enough, on Saturday night they began in earnest.

This isn’t our exact python, but in case you’ve never seen one I googled this fella so you would know what ours looked like.

As the cracks of sunshine break through this afternoon, cumulatively we’ve had 400mm  since Thursday (over half of our average annual rainfall). 250mm of these fell in 6- 8 hours between Saturday night and Sunday morning.

On Sunday morning we went to see how things were at the Learning Centre.

But these are the beautiful contours that everyone was working on and around during the short-lived Bio-fest. Full of water and working well. 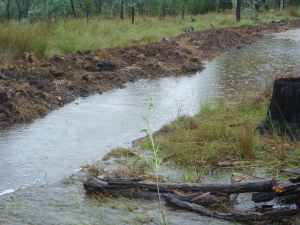 (Stay tuned for updates of when ‘Biofest’ activities will resume).

The local river was still rising at 10 am. The actual bridge is somewhere far below the sign you can see peeking out of the water just above the car’s windscreen in this picture.

Luli’s driveway is somewhere under water on the right of the picture below.

At around midday, we had a call from Lena and Igor to say that the Stuart River had suddenly risen and was lapping at their back steps.

These two have such good hearts. Their only concern was about rescuing the editing hardware and equipment they have stored in their home. Faced with full-blown flood waters, they were prepared to leave all of their other stuff to drown.

Instead, we waded in along the long submerged driveway, and helped them lift everything to higher positions, and watched and waited as the water rose. 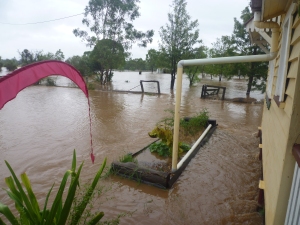 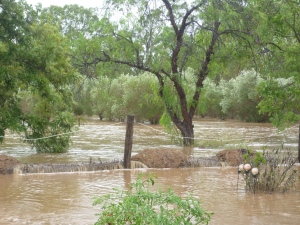 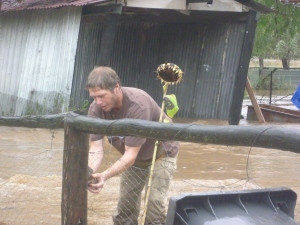 We rescued a bandicoot who was franticly looking for dry land. And AJ (my hero) waded out deep to rescue a wallaby that was caught on a barbed wire fence. 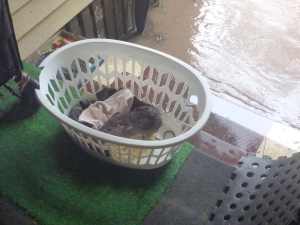 The insects continued to amaze me – clinging to anything not submerged in water, including massing themselves on single blades of grass.

In the end, the water came close but didn’t quite reach the floor of Lena and Igor’s house. 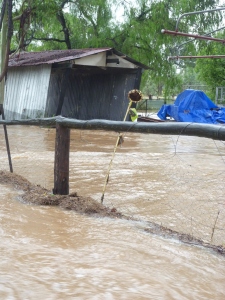 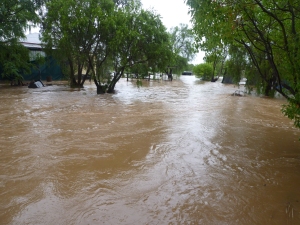 As I snuggle up in my dry bed tonight, my thoughts are with those who aren’t as comfy. The devastation is pretty widespread across Queensland and New South Wales. At least three people have passed and my prayers are for their smooth transition and a swift end to grief for their family and friends.

I do love this sunburnt country but as Lena put it “It is a land of extremes”.

If you are as fascinated by ants as I, you may enjoy this cool documentary about them.

** I scout my weather info at Higgins Storm Chasing for two reasons. One, because it’s usually very accurate and descriptive. Two, because the guy who runs it does it for free, and for his sheer love of weather. He receives donations to support his work.