I know that so many of you have been sending your prayers with us on this trip, especially for the Brazilian leg of our journey. It’s our first time in Brazil and we have arrived because a man here in Brazil, called Denny discovered the Divine Truth. He felt so inspired by the truth that he began to give free sessions about Divine Truth following his other classes on iridology and family dynamics.
When we shared Denny’s story some of you in Australia were so inspired by his efforts that you donated the funds for us to travel here.
So here we are in Brazil, a place where every religion in the world is practiced. It is also a land where today’s common teachings of reincarnation are so entrenched that there is a saying here in Portuguese when things are going badly ‘I must have thrown stones at the cross’. Even Christians it seems are not immune to the belief in multiple past lives.
We left Barbados on Thursday and travelled 24 hours (via Miami) to arrive in the city of our first talks, ‘Belo Horizonte’, which means Beautiful Horizon. The city is in the mountains and has around 5 million inhabitants.
Adriana, a professional translator from the south of Brazil, flew in to gift her translation to us for the entire weekend session. She has been following the path for two years via youtube and MP3 recordings and it was great to finally meet her. She was helped out for some of the translating on the weekend by a new and lovely friend, Isabella.
About 50 people arrived to our first session on Saturday, and AJ covered two topics on the day – ‘The Truth about God’ & ‘The Truth about the Human Soul’. There was varied interest and already the topic of reincarnation was raised with some mixed responses.
On Sunday I participated, channelling some of the spirits who were present with the audience and AJ spoke about ‘The Truth About Spirits & Reincarnation’. While many mixed emotions were stirred in those present, overall the air was clear and AJ was able to speak clearly and explain a great deal.
I was also aware of a huge response in the spirit world.
Brazilians have an exuberance about them and a huge desire to be involved with others and evidently this doesn’t change after passing. So I could feel much chatter, confusion, outrage, joy and grief at the discussion surrounding reincarnation.
Yesterday we spent recording an interview between AJ and Denny with Adriana doing live translation. Last night we shared long discussion and delicious falafel with some new friends.
We are enjoying our stay and have passed on your love to many as you sent it. 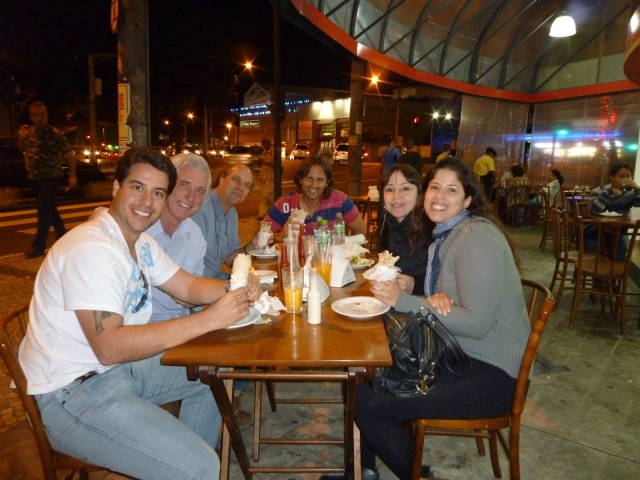 12 thoughts on “A New & Beautiful Horizon”